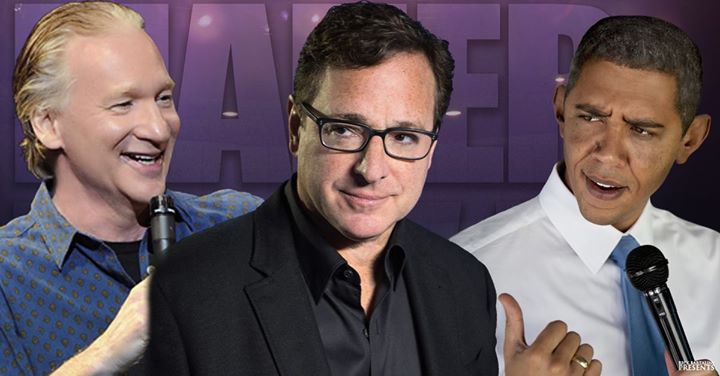 The tradition continues! For the seventh year in a row, Bill Maher will be ringing in the New Year in Hawaii! The standup comedy concerts will be New Year’s Eve at the Neal S. Blaisdell Concert Hall in Honolulu and New Year’s Day at the Castle Theater at the Maui Arts & Cultural Center in Kahului. Making the celebration extra special this year, the host of HBO’s Real Time will welcome actor and Grammy-nominated standup comedian Bob Saget (Full House, Americas Funniest Home Videos) and comedic impersonator Reggie Brown as President Barack Obama to the party for the first time. After sold-out shows for the past six years, Maher continues to make good on his promise to be the “Don Ho of New Year’s.”

For over 20 years, Maher, who began his career as a stand-up comedian and still performs sold-out dates across the country, has never held back and set the boundaries of where funny and political talk can go on American television. First on Politically Incorrect (Comedy Central, ABC, 1993-2002) and for the last 10 years on HBO’s Real Time, Maher’s combination of unflinching honesty and big laughs has earned him 34 Emmy nominations; winning his first in 2014 as the Executive Producer for HBO’s Vice. In 2008, he wrote and starred in Religulous directed by Larry Charles (Borat). The documentary about religions around the world went on to become the eighth highest grossing documentary ever.

Adding to this New Year’s extravaganza, Bob Saget has starred in many successful television shows, including two of the most family-friendly shows network TV has ever produced (Full House and Americas Funniest Home Videos) but he’s also an out of his mind, Grammy-nominated standup comedian for over thirty years. From his HBO special That Ain’t Right to his scene-stealing cameos in Entourage, and The Aristocrats, it’s always effective as Saget embraces his dark side.

Fans can expect the unexpected when it comes to Maher’s New Year’s extravaganza. In 2013, Academy Award-winner Sean Penn and Director Michael Moore made a surprise appearance to introduce Pearl Jam’s Eddie Vedder, who wowed the crowd with a surprise acoustic set. In 2015, David Spade and Jeff Ross added to the hysteria followed up by Margaret Cho and David Cross last year. No matter what happens, one thing is for certain: The Islands are the place to be to welcome in 2018.

“I think everybody wants to be in Hawaii in December,” Maher said. “That was my plan all year; get my ass booked there for New Year’s!”