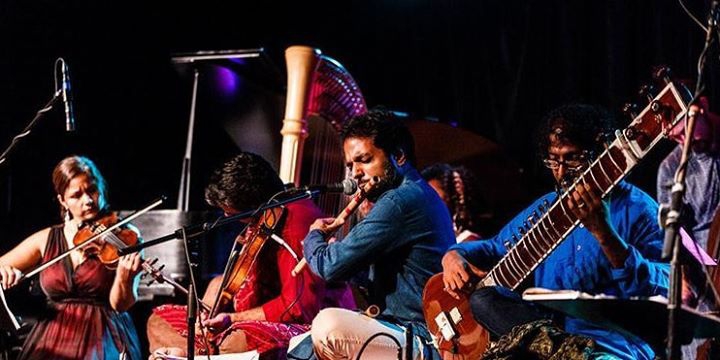 From Tradition to Innovation: Brooklyn Raga Massive in Concert

“…Riveting … Soulful … Preserving the past while blurring genres in an inventive spirit.” — New York Times

“Leaders of the Raga Renaissance.” — The New Yorker

“From Tradition to Innovation” is a BRM concert showcase of all their influences, featuring sitar, tabla, violin and bansuri (Indian flute) along with bass, guitar, drum set and other instruments. The concert begins with a classical raga trio representing BRM’s roots. As musicians move on and off the stage, each successive piece takes on a new character, with original compositions from the group as well as classics from their repertoire, including works from Ravi Shankar, John Coltrane, and Terry Riley. As the concert progresses, BRM tracks the journey Indian classical music has taken as it has expanded around the world in the diaspora and influenced generations of musicians, culminating in their own unique style, which is undeniably Indian and completely Brooklyn. The concert will culminate with a performance of Terry Riley’s minimalist masterpiece In C. This fall, BRM celebrates the CD release of their rendition of this iconic piece as the first ensemble to feature Indian instrumentation and raga influences.

Thanks to our community partner: Honolulu Musuem of Art