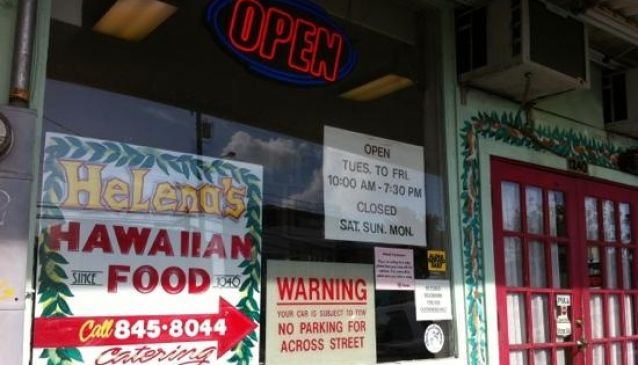 Helena's Hawaiian Food was founded in 1946 which makes it one of Hawaii's oldest restaurants. Serving both locals and tourist with Hawaiian cuisine that has been recognized in 200 by the James Beard Foundation with the Regional Classic Award which only a handful of restaurants in Hawaii have. For 64 years Helena's Hawaiian Food has stood the test of time and it's no wonder why both locals and visitors alike keep coming back.

Helena's recently was moved to its current location of North School Street, Honolulu, Oahu. Now it is situated near the highway and nearby tourist destination such as the Pacific Place Tea Garden and Honolulu Fish Auction. There are also nearby accommodations like the Aston at the Executive Centre Hotel.

There is no secret that Helena's Hawaiian Food serves Hawaiian delicacies that will surely make you come back for more, from their ala carte such as kalua pig and cabbage, beef stew, and laulau to their combination dinner dishes like the kalua pig, squid luau, and lomi salmon. They also serve regular beverages.