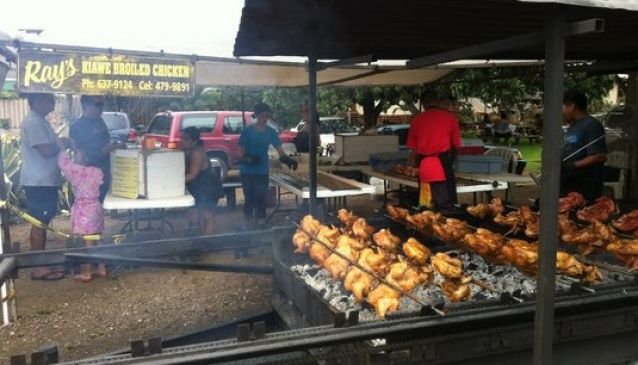 Ray's Kiawe Broiled Chicken is one of those local must go to restaurant and for good reason since they only open on Saturday and Sunday, and there are a lot of people waiting in line just to taste their deliciously cooked broiled chicken. Not only do they have fast service but the food is also very affordable. Ray's offers locals and visitors alike with one of the easiest and delicious food you'll find in Hawaii.

Ray's Kiawe Broiled Chicken is situated in the parking lot of the Malama market in Haleiwa Town. Aside from being near the Malama Market, you can also go to nearby establishments such as Aloha General Store, Haleiwa Beach Park, and Haleiwa Art Gallery after eating at Roy's. There aren't many accommodations really nearby except the Relax at the Alternative Green B&B.

As stated earlier, Ray's Kiawe Broiled Chicken is one of the simplest restaurant/establishments in Hawaii since it is basically just a Food stand. They serve their signature Kiawe Broiled Chicken with rice, coleslaw with pineapple, and water. You can either order half a chicken or one whole and the price for a meal in Ray's is really affordable compared to other food establishments.