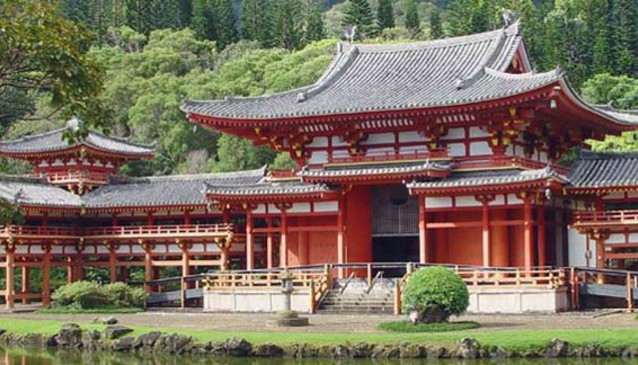 The Byodo-In Temple in Kaneohe, Oahu is a scale replica of a temple in Uji, Japan that was constructed nearly ten centuries ago. Nestled at the base of the Ko'olau Mountains in the Valley of the Temples Memorial Park, the Byodo-In Temple commemorates the first Japanese immigrants to Hawaii. The Temple was built without a single nail, in the same manner as the Uji Temple.

After crossing the bridge, veer left to the bell, or 'Bon-sho' meaning sacred bell. Striking the bell is good luck and it customary to ring the bell prior to entering the temple. The deep chime of the Bon-sho resonates 'deep calm and peace, cleansing the mind of evil and temptation.'

Inside the main temple hall sits the towering Amida Buddha statue. Be sure to remove your shoes before entering the temple as a sign of respect. The golden statue tops nine feet and is an original work by Masuzo Inui, a famous Japanese sculptor.

You are free to roam the Temple grounds which include a large pond that weaves under and around the temple, brimming with oversized koi fish. There is a gift shop on the grounds where fish food and temple trinkets are sold. A small gazebo sits just North of the Temple, known as a meditation pavilion - a place 'of serenity, for private thoughts, and inner peace.'